History Of The Patriots Program

The idea for the “St. Louis Patriots”, like many, was ‘born’ out of necessity! It was March of 2002, the Missouri Association of Small Christian Schools determined that the small Christian teams could only ‘bring’ 2 home school athletes, as part of their play-off contingent, to the State qualifying tournament in Joplin, Missouri. This was a wake-up call to several fathers who realized it was time to make “our own way”---and so the search began for the opportunity to create an all home-school competitve basketball team in the St. Louis area.

The “search” started a mere several months later at a wedding reception in Columbia, MO where one of the dads “chanced” upon the Director of the Missouri Sports Hall of Fame. That encounter connected us to to the ‘father’ of Missouri home school basketball: Pastor Jerry Carlin, Senior Pastor of First Evangelical Free Church of Springfield, MO.

Pastor Carlin, a father, a home-educating advocate, and raving basketball fan, encouraged this St. Louis dad to take up the challenge and get a team started in the St. Louis area. Little did we know, all that would spawn from these seemingly random events and conversations. God certainly granted His favor to the fledgling new group of dads, and their sons…and, as the saying goes, the rest is history!

The Fall of 2009 marks the beginning of our 8th season, and the interest in competitive basketball continues to grow, as has the original team of less than a dozen players, has grown to include Jr. High, JV and Varsity teams. There is even a Girl’s team, called the Patriettes, that was born from this same set of ideals.

Our history would not be complete without mention of former Head Coach, Doug McVicar. Coach McVicar was a homeschool dad and veteran coach with over 20 years of competitive public and private school basketball coaching experience. He coached the Patriots for the first five years of the program.

In the spring of 2002 Coach McVicar walked away from a promising future as a public high school coach to the humble beginnings of the brand new St Louis Patriots homeschool basketball program. That first year he coached many homeschooled young men who hadn't played a lick of competitive basketball beyond their own backyards or pick-up games at the local YMCA.

Because of his outstanding coaching and great rapport with the players, the Patriot program continued to grow and strengthen over the years. The boys who have had the opportunity to play for Coach McVicar are truly blessed and the St. Louis homeschool community is blessed as well.

After much prayer, Coach McVicar found it necessary to resign as head varsity coach following the 2006/2007 season. He will be fondly remembered and greatly missed. Much of what the Patriots are, is a direct result of the this man's godly influence. 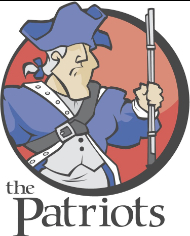